Solid Serenade
Trap Happy is a 1946 American one-reel animated cartoon and is the 25th Tom and Jerry short directed by William Hanna and Joseph Barbera, produced by Fred Quimby and animated by Kenneth Muse, Ed Barge, Michael Lah along with uncredited animation by Pete Burness and Ray Patterson. The name of the cartoon is a pun on the term "slap happy."

Jerry is being chased down the steps by Tom. Jerry hides under a chair and Tom runs under it, but gets smacked on the bottom with a board from Jerry. Jerry's mousehole is then mined with dynamite that are set to explode, but unknowingly for Tom, Jerry has lit

another firework with a shorter fuse under him. Tom angrily continues the pursuit until Jerry offers him a fireplace shovel to hit him with. Tom misses several times and Jerry holds the tool down until Tom pulls on it so hard he hits himself when Jerry flees. Tom jumps into Jerry's hole, but his lips are ruffled and Tom has to pull himself out. Tom is tired of these cat-mouse chases where he loses every time and searches in the Yellow Pages for an exterminator to summon to his aid. He finds one: Ajax Mouse Exterminators. One Call - That's All. Tom impersonates Mammy Two Shoes' voice to make it believable to the company.

An exterminator (Butch) arrives within seconds, washes his hands at the fishbowl and goes to work. He paints a steel nut into the guise of cheese with two shades of yellow to trick and fool Jerry, and tops it off with a blast of "Essence of Cheese". Satisfied, Butch rolls it into Jerry's hole. Jerry, suspicious, smells the nut. Since it smells like cheese, you know the drill: he eats it. Butch then magnetizes Jerry over to him, trapping the mouse from getting away. Butch pulls out an axe and then holds Jerry down while he attempts to cleave the mouse in two, but Tom, scared of seeing the deed, turns away, allowing Jerry to substitute himself with Tom's tail. Tom screams in pain and the 2 vs. 1 chase begins.

Jerry runs into his hole and Butch pins him to a wall inside the hole with a corkscrew. With nowhere to go, Jerry touches two electric wires to the corkscrew, causing it to backfire onto Butch and leave him in shock.

The next scene shows Tom and the exterminator attempting to try poison gas on Jerry by blasting it into his hole so that he perishes inside or comes out. It is the latter as he walks out with a gas mask on; the two cats are puzzled, but don't figure out his identity. Jerry salutes and the cats follow suit as if to say "Good day!" Tom returns to pumping gas, but Butch has deduced that the person behind the mask must be Jerry. He slaps Tom and points to Jerry unmasking himself, taunting the cats and running off. Both cats chase him one behind the other, but fall victim to Jerry placing an iron in their path such that Butch's mouth devours Tom whole.

Jerry hides in another mousehole and the two cats resort to prying up the entire wall. Jerry has a hammer and slams Tom's foot, causing him to lose grip (and howl in pain) and jump away and Butch's fingers to be crushed (loud screaming in pain). Jerry plays "Yankee Doodle" on the eight digits with the hammer, ending on a powerful press of two of them and Butch releases them screaming. All six of the main fingers are red, and his fingernails pop out, letting out steam, making a train whistle sound. Butch instructs Tom to keep quiet and hands him a sledgehammer while he sneaks in through a grate and chases Jerry through the walls of the house (doing significant damage in the process) to lure him over to Tom. Jerry pops out of the hole and Tom swings as instructed, only to find Butch's head in his place soon after. Butch pops out of the resulting hole in the floor and a bump rises on his head such that his hat hangs on it.

Butch lights and throws a bomb to Jerry's mouse hole and the cats hide; Jerry sees and quickly throws it back to its lighters. All three play Hot Potato with the bomb until Butch's hat falls off his head and ends up in the mix. Jerry, instead of getting the bomb as intended, gets the hat, and Butch has the bomb on top of his head. Puzzled as to why Jerry isn't planting the bomb on Butch again, the cats look up to see where it is, with a scene change cued by the explosion.

Jerry runs into one hole and comes out the other to find Butch on that side, then comes back out the other and finds Tom there. Both cats grope and feel Jerry at the same time and grab for him just as the mouse jumps, leaving the two cats with hands held (though they don't know it). Both cats think they have Jerry and yank the other cat into the wall several times. Butch ups the ante and pokes at Tom with a broom, even going so far as to thrust it into his throat and therefore his body from mouth to tail. Tom proceeds to pull Butch right through the entire wall, demolishing it, all with the false impression that their hands are latched on to Jerry.

Tom slaps the pile of brick and rock with a board until he sees an opening, which he digs through and finds.....Butch's hat, with a corner missing. As Tom tries to find Jerry in it, Butch revives and takes his hat back as he draws himself up, now rather incensed. Tom makes an "oops!" face, but Butch marks out the "MOUSE" in "MOUSE EXTERMINATOR" on his bag and replaces it with:

Then he points to himself and gulps, realising what this means. Then Butch brandishes a double-barreled shotgun and threatens Tom who runs away to the window as he runs after soon Jerry comes and watched Butch shooting Tom as this cartoon fades out (slowly). 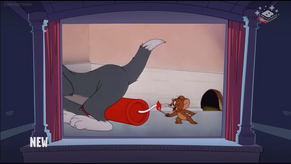