Tom and Jerry Wiki
Register
Don't have an account?
Sign In
Advertisement
in: Characters, Dogs, Recurring characters,
and 21 more
English

Pup on a Picnic
Barbecue Brawl

Tyke Bulldog is a gray bulldog puppy and is the son of Spike Bulldog, appearing in Tom and Jerry cartoon series and is mostly seen with his father Spike, he made his debut in the 1949 short Love That Pup. Like his father Spike, Tyke also hates Tom just like his father ever since Tom hung him on a flag post. Ever since he was born, all the episodes Tyke was in included himself or his and Spike's lunch being tormented by Tom.

He and his father would later star in the spin-off series Spike and Tyke, as the father and son duo starring in many media such as the later in the comics, starring roles episodes in Tom and Jerry Kids and etc.

Tyke is similar to his father Spike Bulldog. He has a gray coat, a red dog collar, and light blue eyes. He is mostly seen standing on four legs and standing on two feet (in a few instances).

Tyke is a playful, kind and caring young bulldog pup that he is a son of Spike and he keeping an eye on Jerry by the other cats like Tom or Butch. He loving and caring to his father Spike and even wants to be like him when he grows up, He can sometimes seen as smarter and more aware than his father Spike that is proven in the cartoon Scat Cats, when the alley cats disguise as the owners George and Joan, when Spike believes there were actually his owners, but Tyke wasn't fooled by this disguise.

War of the Whiskers

Tyke appears in Tom and Jerry in War of the Whiskers for he is a one of the five All-Round fighters alongside Jerry, Robot Cat, Quacker and Nibbles. He is a faster in speed and like his father Spike that he fights Jerry in Haunted Mouse.

Spike happily with his son - Tyke. 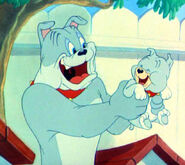 Spike and Tyke sleeping peacefully with their true disturber Jerry. 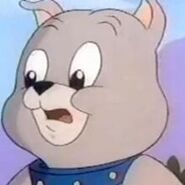 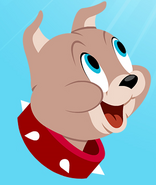 Tyke Artwork in The Tom and Jerry Show (2014).
Español
Community content is available under CC-BY-SA unless otherwise noted.
Advertisement