Due to the success of the Looney Tunes Golden Collection, Tom and Jerry Spotlight Collection and Popeye DVD series, Warner Home Video issued a 3-DVD set on February 12, 2008 showcasing the various animation properties that they own including their home-grown product Looney Tunes. Other animation properties represented on this set were Tom and Jerry, Droopy, and other classic MGM cartoons as well as entries from Max Fleischer's Popeye and Superman series (both originally released by Paramount Pictures). All cartoons selected for this release were nominated for the Academy Award for Animated Short Film, with the exception of the film So Much for So Little which won the Academy Award for Documentary Short Subject. A total of 41 cartoons (completely uncut and unedited) were chosen for this set, 15 of them being winners. Many of the Looney Tunes shorts featured on this collection have also been released on the Looney Tunes Golden Collection DVD sets, but this set also includes a handful of cartoons that have not been released on these Golden Collections. The cartoons A Wild Hare and Hiawatha's Rabbit Hunt which were previously reissued as Blue Ribbons have their full original titles restored. The cartoon From A to Z-Z-Z-Z previously released as a Blue Ribbon, but retaining its full slate of credits was also presented on this set in its original format. All the Tom and Jerry shorts have been previously released on the Spotlight Collections, but most of them are presented here in remastered versions (the copies sourced for Mouse Trouble and Quiet Please! were badly restored transfers with washed-out colors and grainy pictures, similar to the ones that will be seen in the Tom and Jerry Golden Collection DVD & Blu-Ray sets years later). Three MGM cartoons, Touché, Pussy Cat!, Good Will to Men and One Droopy Knight are presented in their original Cinemascope aspect ratios. Aside from this 3-DVD set aimed towards collectors, Warner has also released all three discs separately.

All 15 cartoons on this disc won Academy Awards

All 14 cartoons on this disc were nominated for Academy Awards, but did not win

The print of Popeye the Sailor Meets Sindbad the Sailor featured on this set has the music from the a.a.p. ending logo (originally the ending music to Olive Oyl for President) on the end Paramount title.

All 12 cartoons on this disc were nominated for Academy Awards, but did not win 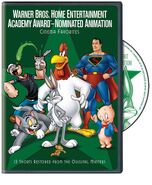 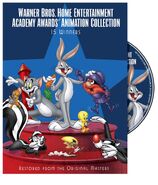 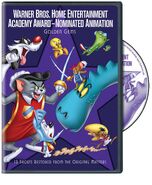 Add a photo to this gallery
Retrieved from "https://tomandjerry.fandom.com/wiki/Warner_Bros._Home_Entertainment_Academy_Awards_Animation_Collection?oldid=40425"
Community content is available under CC-BY-SA unless otherwise noted.