Tom and Jerry Wiki
Register
Don't have an account?
Sign In
Advertisement
in: Characters, Cats, Males,
and 4 more

Wilson is the main antagonist in The Tom and Jerry Show (2014) episode"Franken Kitty".

Wilson is an elder cat with grey fur, and as a kitten, he is an orange-red kitten with orange fur and looks like Puff. Wilson also has yellow-black eyes.

Wilson is an elderly cat that does nothing, he looks like a statue and doesn't have enough strength. He is similar to a jungle wild cat. So he roared like a lion. As a kitten, he tries to pursue Jerry and his friend, Napoleon. He looks like an inoffensive cat but is mean and smart. 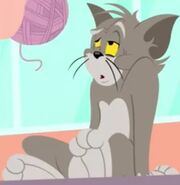 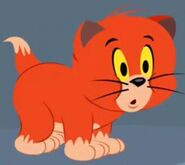 Wilson as a kitten.
Community content is available under CC-BY-SA unless otherwise noted.
Advertisement