Tom and Jerry Wiki
Register
Don't have an account?
Sign In
Advertisement
in: Characters, Cats, Males,
and 3 more

Winston is a recurring character in The Tom and Jerry Show (2014) and voiced by Maddie Taylor. Winston is a obese house cat that lives with his owner.

He is a yellow fat cat with a bushy tail and red hair.

Winston is a friendly, yet dim-witted cat who is nice to mice like Jerry and Tuffy, thus he does not have any interest in eating or chasing mice. He also doesn't like to be lonely. He is also friends with Tom or Butch sometimes.

Mouse Party is the only episode that Winston chases mice.

Winston's greatest weakness is gluttony, which is reflected by his body shape. He's especially fond of sweets and pastry, which was seen in Stolen Heart, when he hired Tuffy to steal a cake baked not for him.

Winston is also very clumsy, as shown in episodes like I Quit and Cat Match Fever, where he accidentally hurts or steps on Jerry a few times.

The Tom and Jerry Show 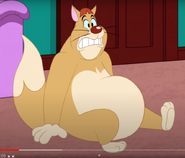 Winston with a heart-shaped cake.

Winston has eaten the heart-shaped cake.